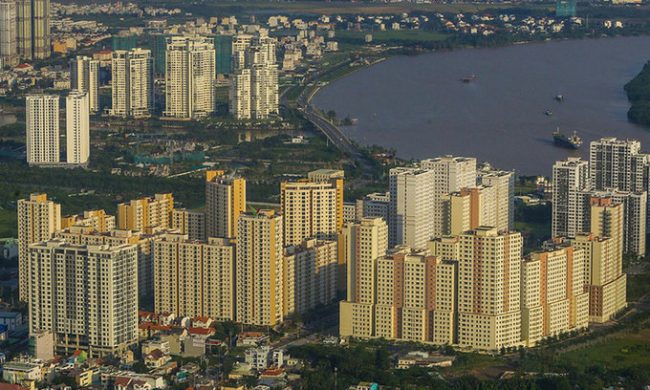 Ho Chi Minh City landlords have been forced to lower rents further with the second wave of Covid-19 hitting demand.
Minh in District 1 has so far lowered the rents for her two apartments by 30 percent to $900 a month each.

They used to be rented by foreigners for $1,300, but she had to lower the rate to $1,100 in April after a nationwide social distancing campaign began.

In July, when foreigners could not come to Vietnam due to the pandemic, she had to lease it to locals who pay even less. “The longer the pandemic goes on, the more damage it will cause to me because I have bank debts to pay.”

Another landlord, Trieu in District 7, cut rents for his three properties by 15 percent after the first wave, and by another 10 percent this month. “I myself have to repay banks VND25 million ($1,080) a month.”

Tai, a broker, said rents in District 4 have dropped by 30-35 percent since the beginning of the year, explaining that many people renting properties there were tourists or businessmen with short-term needs who have left.

Rents would continue to fall as long as foreigners are prohibited from entering Vietnam, and locals limit spending due to the pandemic, he said.

Industry insiders expected the situation to continue through the year. Tran Hoai Linh, CEO of real-estate firm VNO Group, said the second wave of Covid-19 has resulted in less demand and falling rents.

Rents in all segments have seen a drop of 20-35 percent from last year, the biggest fall in a decade, he said.

Landlords with apartments costing VND15 million ($647) a month or more would have trouble finding tenants, and those priced upward of $1,000 would have no takers since foreigners could not enter Vietnam, he said.

Tenants are likely to leave a high-priced apartment for a cheaper one to reduce costs during the pandemic, he added.

Vo Huynh Tuan Kiet, associate director of residential project marketing at real estate firm CBRE, forecast rents would continue to fall until the end of the year since there is also an abundance of supply.

Vietnam recorded the first domestic Covid-19 case on July 25 after a 99-day streak without community transmission. Since then the country has reported 389 domestic cases in 14 cities and provinces.

The country had had 847 cases as of Tuesday morning, 433 of them active.